The collection was donated by Vania Protti to the Centro Sperimentale di Cinematografia in 2017. It consists of 70 folders, each relating to one film, collecting all promotional material from the distribution campaigns – i.e. press advertisement, press books, catchphrases, correspondence, cards, invitations, press reviews, directions for businesses and marketing advice for the promotion of films during events and festivals, budgets and expenses, audio DVDs, dubbing DVDs, master DVDs,  home video DVDs, trailers, clips, CD press kits, films with time code, DVDs with behind the scenes photos – from the years 1998-2013. Moreover, there are 36 scripts, two dissertation theses and one book (pdf format) dedicated to the Academy.

Vania Protti and Manfredi Traxler created Academy Pictures in 1976. At the beginning the company was limited to classic distribution and its catalogue included one western movie, one mystery thriller, one children’s film and so on. In 1978, with Il matrimonio di Maria Braun by Rainer Werner Fassbinder, they started engaging in the distribution of films by European authors and American independent cinema. Thanks to Mr and Mrs Traxler’s passion, some of the greatest contemporary film directors, such as Kusturica, Greenaway, Wenders, Rohmer, Jarmusch, Egoyan, Almodóvar, Kieslowski, Lee, Ford, and Solondz among others, have been brought to the attention of the general public.After the passing of Manfredi Traxler in 2000, Vania Protti continued her commitment to the enhancement of international art-house cinema, first with Lady Film and then with Archibald Enterprise Film, until 2015.

The collection was donated in 2013 and amounts to about 100 bibliographic documents, such as magazine issues, festival catalogues and screenplays. As a result, the following are available for consultation: scripts of the most successful recent international movies, most of which have been inspired by literary works; many translations of Italian films into English or French, created for their distribution abroad; and finally a few valuable texts, such as “Fans”, a 1991 script by Nagisa Oshima and Paul Mayesberg, and “Due telegrammi” by Michelangelo Antonioni and Rudy Wurlitzer, based on a story written by Antonioni in the 70s and published in Quel bowling sul Tevere.

Adriana Chiesa Enterprises srl (A.C.E.), established in Rome in 1990 by Adriana Chiesa Di Palma, is an international film distribution and production company. In 1999 Adriana Chiesa was nominated “European Film Exporter of the Year” and in 2006 she was awarded the Golden Grolla for Italy’s best-selling film abroad for “All the Invisible Children” by Mehedi Charef, Emir Kusturica, Spike Lee, Katia Lund, Jordan Scott, Ridley Scott, Stefano Veneruso and John Woo. Due to her support towards new creative talents, her dedication to art films and commitment to each and every project, Adriana Chiesa Di Palma is regarded as a role model for young producers and distributors who are taking their first steps within the industry. The company offers a selection of more than 300 films both by prestigious directors and up-and-coming talents, which includes documentaries and animation movies, as well as a rich repertoire of restored films.

The collection includes 48 monographs and books with press cuttings, plus 200 loose newspaper cuttings.

Alfredo Bini (1926-2010) – Special Administrator for the Centro Sperimentale di Cinematografia (Experimental Film Centre) from 1994 to 1995; he is known for having produced some of Pier Paolo Pasolini’s most famous masterpieces, such as “Accattone” and “Mamma Roma”.

The collection consists of 61 screenplays, all of which have been filmed with the exception of one (I ragazzi dell’isola verde: as a note on the screenplay itself explains, the production of the film was interrupted when the children grew too much), as well as 23 original stories.The screenplays’ authors are some of the most prolific and important of the fascist era: Sergio Amidei, Piero Ballerini, Oreste Biancoli, Alessandro Blasetti, Luigi Bonelli, Mario Bonnard, Carlo Borghesio, Carlo Ludovico Bragaglia, Carlo Campogalliani, Aldo De Benedetti, Ezio D’Errico, Alessandro De Stefani, Raffaello Matarazzo, Mario Monicelli, Vittorio Metz, Mario Soldati, Steno, Guglielmo Zorzi, to mention a few.

Valentino Brosio (1903-1999) – Italian writer, art scholar, collector and film producer. He graduated from Law school in 1925, devoted himself to teaching Art History and also took up a career in journalism; he worked as a correspondent and collaborator for numerous newspapers and magazines and in 1938 began a long career in the movie industry. He was involved in the production of about sixty movies, whose directors were some of the most important of the 40s and 50s: e.g.La dama bianca” (1938) Mario Mattòl’s debut film, “Due milioni per un sorriso” (1939) by Carlo Borghesio and Mario Soldati, “I promessi sposi” (1941) by Mario Camerini, “Un colpo di pistola” (1942) by Renato Castellani, “Malombra” (1942) by Mario Soldati, “Abbasso la ricchezza!” (1945) and “Abbasso la miseria!” (1946) by Gennaro Righelli, “La carrozza d’oro” (1952) by Jean Renoir, “I figli di nessuno” by Raffaello Matarazzo (1952) and “Venezia la luna e tu” by Dino Risi (1958). He was President of Cinecittà from 1945-1946 and started the renovations of the studios. In 1953, when the Production Management Course was established the Centro Sperimentale di Cinematografia (Experimental Film Centre), Brosio was invited to be its chair. His Manual of Film Production, published as part of a series of critical and scientific studies by the Centro Sperimentale di Cinematografia, Edizioni dell’Ateneo – Rome, won the PremioNapoliaward in 1956 and its is still an authoritative text for aspiring producers.

This collection consists of 77 film texts, which were left to the Cinecittà management by their authors. It includes synopses, screenplays, and scripts of film or television projects, both produced and not, dating from the last few decades. A few of the authors are Michelangelo Antonioni, Luigi Magni and Andrei Konchalovsky.

The collection includes 467 folders produced by Cineriz’s press office, which include its film’s promotional campaigns. They pertain to 412 movies and include catchphrases, dialogues, correspondence, press books with newspaper ads and other graphic material, directions for stores and suggestions for film promotion during events such as gala soirees.

The media company was founded in 1956 in Rome by Angelo Rizzoli and was affiliated with Rizzoli Film, being its distribution and rental department. In the early 60s it was turned into a joint-stock company, whose largest bulk of shares was owned by Rizzoli publishing, while the remaining shares belonged to a group of managers, such as Gigi De Santis, Pio Pandolci Alberici, Angelo D’Andrea, Eraldo Leoni, Ottorino Moresco. Cineriz operated in the distribution business from the 50s to the early 80s: its catalogue, ranging from art films to B movies, shows the entrepreneurial attitude and the great insightfulness of its founder, as as the company was able to cater to an extremely diverse audience and to promote both acclaimed directors and new talents.

The nucleus of the acquired collection includes 29 sets of scores and orchestral parts of soundtracks for films and documentaries produced and distributed by the Lux Film company between 1948 and 1953. Among the composers of these refined soundtracks we find: Goffredo Petrassi, Ildebrando Pizzetti, Fernando Previtali, Renzo Rossellini, Nino Rota, Roman Vlad. The productions, mainly adaptations of literary works, are: I promessi sposi (1941) by Alessandro Manzoni, directed by Mario Camerini; Malombra (1942) by Antonio Fogazzaro, directed by Mario Soldati; Zazà (1944) from the play of the same name by Pierre Berton and Charles Simon, directed by Renato Castellani; La figlia del capitano (1947), based on Aleksandr Sergeevič Puškin’s novel, directed by Mario Camerini; and Il mulino del Po (1949) by Riccardo Bacchelli, directed by Alberto Lattuada. There are also scores from films that deal with issues which are still relevant today and include various genres such as: the noir Gioventù perduta (1948) by Pietro Germi, the comedy Vivere in pace (1947) and the drama Campane a martello (1949) by Luigi Zampa, the starkly neorealist Riso amaro (1949) by Giuseppe De Santis and the historical Teodora (1953) by Riccardo Freda.

The Lux Film production and distribution company was founded in Turin on February 21, 1934 by entrepreneur Riccardo Gualino as Compagnia italiana cinematografica Lux. In 1940 the production company moved from Turin to Rome, changing its name to Lux Film S.A. and, for about two decades, was Italy’s most prestigious and notorious production firm. Right from the very beginning, an important element that marked its work was a focus on soundtracks. In 1953-54 the company’s slow decline began, despite some successes achieved with its partner Vides, until the beginning of the following decade, when its financial crisis proved irreparable. In 1969 Lux Film was absorbed, along with Rumianca, by N. Rovelli’s Sir: it remained non-operational for nearly three decades and ceased to exist in 1998, when it was acquired by Cristaldi Film. 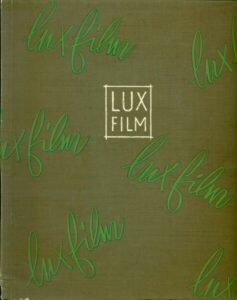 The collection of documents, which was acquired between 2012 and 2013, mainly consists of Cines-related mail from 1899 to 1916 and a bound book, “Arbitraggio Cines-Pouchain” (the litigation between the company and its CEO, Adolfo Pouchain), which collects documents concerning the activities of Cines from its founding in 1906 to 1910. All documents have been thoroughly summarised in extra inventories, which are connected to the catalogued files and can be consulted on the on line database.

At the beginning of 2020, the collection was expanded with the addition of more substantial section, consisting of printed documents, films and iconographic material. This second body of documents includes around 300 items, such as correspondence, cards, telegrams and various documents, notably letters and reports from various senders, all addressed to Ernesto Pacelli in his capacity as president of Cines, letters from Baron Alberto Fassini, the company’s powerful general manager, a file from board member Count Francesco Salimei and a memoir relating to the aforementioned Pouchain trial.

Ernesto Pacelli (1859-1925) – Prominent figure in Roman society during the first decades of the XX century, he was Vatican’s financial advisor, president of the Banco di Roma and president of Cines Film Company.

The collection was donated to the library by Enzo (Vincenzo Franco) Porcelli between 2017 and 2022. It is composed by the documentation pertaining to his activity as a producer from 1967 to 2025, which includes more than one hundred scriptments, treatments and scripts, as well as ninety folders covering contracts, accounting, mail, estimates and budgeting plans of some feature films from the 1990s, such as “Il ladro di bambini” (1992) and “Lamerica” (1994) by Gianni Amelio, “Santo Stefano” by Angelo Pasquini (1997), “Branchie” by Francesco Ranieri Martinotti (1998), “Elvjs & Merilijn” by Armanno Manni (1998).

Vincenzo Franco Porcelli  (b. 1944) – After graduating in production from the Centro Sperimentale di Cinematografia in 1967, he periodically held the position of professor of the production course at the Scuola Nazionale di Cinema. He based his professional career on international art-house cinema. Between 1977 and 1981 he produced several films by director Marco Bellocchio, most notably “Il gabbiano”, “Salto nel vuoto” (which was co-produced with Silvio Clementelli and won two awards at the Cannes Film Festival), “Vacanze in Val Trebbia”, “Gli occhi, la bocca” and last but not least “Enrico IV”, starring Marcello Mastroianni and Claudia Cardinale. In 1982 he produced “Colpire al cuore”, by the then newcomer director Gianni Amelio, with whom he worked again in 1992, producing “Il ladro di bambini” (Grand Prize of the Jury at the Cannes Film Festival) with Angelo Rizzoli. Two years later he produced “Lamerica” (EFA Award), with Mario and Vittorio Cecchi Gori, and finally in 2004, “Le chiavi di casa”, both by the same director. In 1991 he won the Academy Award for best foreign language film with “Il viaggio della speranza” by Xavier Koller, a co-production between Switzerland, Germany and Italy.

This consists of material from Rizzoli Films, the famous film production company. So far 900 items have been inventoried, including monographs, magazines, screenplays and volumes of press cuttings. There are many documents about film matters, as well as theatrical texts, stories, novels, essays, and a large number of texts on cinematographic techniques. Of special interest are the volumes of press reviews of some important films, in particular Federico Fellini’s “8 ½” and “Ro.Go.Pa.G.”, a4-episode film directed by Roberto Rossellini, Jean Luc Godard, Pier Paolo Pasolini and Ugo Gregoretti.

The Rizzoli Film is a film company founded by Angelo Rizzoli in 1965.

Franco Cristaldi’s Vides Studios’ press release collection is made up of 248 volumes, which relate to the years between 1950 and 1975. They include newspaper and magazine reviews, news and interesting facts about 62 films by Cristaldi and the production company itself as well as about 11 actors engaged by Vides, like Rosanna Schiaffino, Thomas Milian, Giuliano Gemma, Stefania Sandrelli and Claudia Cardinale.