It was established in 1935 as an aid to the education of CSC students and it began to increase its holdings during the 50s, as a consequence of its opening also to users not attending the school. Over the years it progressively made a name for itself as a place of conservation of film culture and, thanks to new services, such as the digital library, the archive, the on-line bookshop and the BiblioChiarini app, it became its main promoter.

The acquisition policy supported the library’s specialization in the fields of entertainment and audiovisual communication, but also included related topics like fiction, costume and set design, photography, art and architecture. In the last years, in addition to the expansion of the collection, the library’s main objectives focused on the upgrade to modern technologies and the accurate process of cataloguing the bibliographic material.

Presently the entire collection amounts to about 155,000 items, including books, magazines, documents and manuscripts, dissertation theses, music scores, original scripts, press reviews, graphic material, brochures, sketches and other archive material. Since 1965, with the establishment of the “Special fund for the granting of subsidies to films with artistic or cultural purpose”, synopses, treatments and screenplays have been under State protection and are entrusted to the Experimental Film Centre with the goal of preserving and making them available for study (L. 1213/65, L. 153/1994, D.Lgs 28/2004, L. 106/2004, DPR 252/2006).  Since 11th April 2013 the synopses, screenplays and treatments that have been found to belong to the categories suited for ministerial registering are delivered by MiBACT’s (Ministry of Cutural Heritage and Activities and Tourism) Film Department to the “Chiarini” Library in digital format. The Ministry’s archive was integrated with private collections, some of which are connected to special institutions – such as Cinecittà or the Solinas Prize – while others belonged to journalists, producers, screenwriters, directors, costume and set designers. There are many collections of books and documents which come from the private archive of directors, screenwriters, producers, professionals and celebrated scholars of Italian film: Alfredo Bini, Valentino Brosio, Fabio Carpi, Andrea Crisanti, Fabio De Agostini, Ennio De Concini, Massimo Franciosa, Luigi Freddi, Mario Garbuglia, Gherardo Gherardi, Angelo Francesco Lavagnino, Marco Leto, Carlo Lizzani, Domenico Meccoli, Luciano Michetti Ricci, Massimo Mida Puccini, Fausto Montesanti, Ernesto Pacelli, Lorenzo Quaglietti, Giulio Questi, Folco Quilici, Gian Luigi Rondi, Piero Tosi, Alida Valli, Franco Cristaldi’s Vides film company and many others. A great recognition of the Library’s institutional role as a place dedicated to the safeguard, protection and promotion of the archive heritage of film culture came with the awarding, by the Superintendence of Archives of the Region of Lazio, of the prestigious “Declaration of especially important historic interest” for the Giuseppe De Santis, Carlo Savina, Roberto Rossellini, Adriana Berselli, Guido Aristarco and Luciano Salce collections. 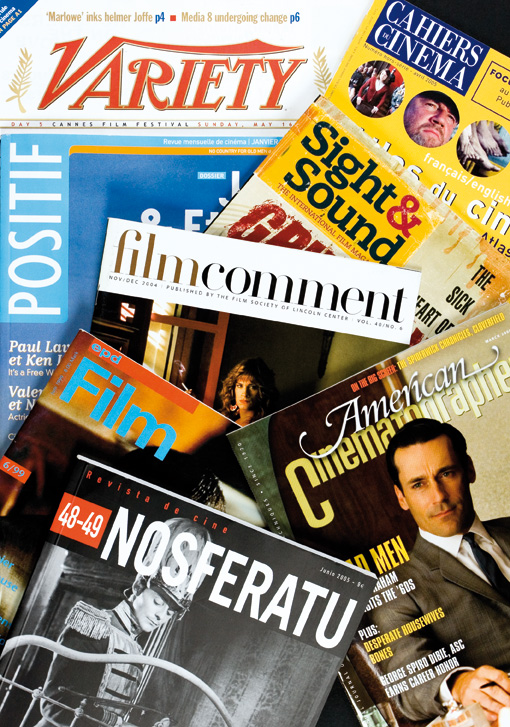 The valued material of the periodicals collection was also used for the creation of the “Rizzoli archive edit” volumes La dolce vita, 8½, Giulietta degli spiriti, both collections of press reviews from Rizzoli Film which are catalogued and housed at the Chiarini Library.

The major Italian film magazines have been the object of an examination and indexing project, which was carried out in preparation for the filing process, in English, in collaboration with FIAF, whose catalogue is available for online consultation from all computers at the Foundation.

As far as conservation and easier accessibility go, a few years ago saw the launch of the digital Library project, which is concerned with the digitalization of rare magazines and precious items which are more subject to deterioration. All issues of the historical magazine «Bianco e Nero» between 1937 and 2002 have been indexed.

The Quaderni della Biblioteca “Luigi Chiarini” series publishes technical books which aim to promote different collections. The last booklet, Le Fan magazines statunitensi, is dedicated to the world of US jargon-free educational magazines, also known as fan magazines, which are very valuable for the complex connections with the star system and the cultural production from the 1910s to the 1960s.

Since 2009 the Experimental Film Centre organises an ongoing and successful program of virtual exhibitions offering, on the Foundation’s website, a series of iconographic itineraries, which were created through the digitalization of sketches, music scores, albums and fashion magazines, that reveal the beauty, exclusiveness and originality of these items. The most recent projects were the exhibits dedicated to the work of famous costume and set designers Marisa D’Andrea and Alberto Verso and a few press books.

The management of the Library’s metadata is carried out with a specialised software; moreover, digital collections are entrusted to the ICCU’s (The Central Institute for the Union Catalogue of Italian Libraries and Bibliographic Information) MagTeca website, where they can be permanently stored and are available for consultation through the Internet Culturale portal and through the CulturaItalia and Europeana portals. The “Chiarini” Library is part of the AIB (Italian Libraries Association) and ANAI (National Association of Italian Archives) trade associations and is involved in various projects such as Michael (Multilingual Inventory of Cultural Heritage) in Europe (a website that aims at promoting the digital European cultural heritage) and Europeana Fashion Heritage (European fashion portal). It is also involved in the San and Siusa projects in the DGA (General Directorate of Archives) and Archivi della moda del Novecento project which, under the patronage of MiBACT and the nation-wide coordination of ANAI, enabled a thorough knowledge of the archives and the sources of fashion history, thanks to the creation of a specific portal.