This material comes from the private collection of Paolo Fama and consists of a large number of loose copies of Italian and international fashion magazines published between the 1950s and the 1970s. The titles include: «Robes Couture», «La Sposa», «Jardin des Modes», «Burda» and «Robes et Manteaux».

The library collection which belonged to Filippo Ferrazzano, amateur filmmaker, director, writer, journalist and lecturer, was donated by his sons in 2020. The collection includes rare publications on the theory and history of cinema, mostly from the 1930s and 1940s, as well as several issues of magazines that were largely used to fill in for missing editions of specialised film periodicals already owned by the Chiarini library, such as: “Altro cinema”, “Il cineamatore”, “Cinema ridotto” and “Passo ridotto”. All catalogued items are available for consultation by library users.

Filippo Ferrazzano (1915-1998) – An amateur filmmaker, director, writer, journalist and lecturer, he was awarded first prize at the Piacenza Amateur Dramatic Society’s theatre festival in 1949 and was nominated for the Vallombrosa Literary Prize in 1960. He was editor-in-chief for central and southern Italy of the newspaper “El progreso”, based in Caracas (Venezuela). He directed documentaries and short films and was among the founding promoters of FEDIC (Italian Film Clubs Federation), of which he became a board member. He also established the Piacenza Film Club. Further accolades include first place at the Lisbon International Kids Film Festival in 1954 with the short film “Il cielo risponde sempre”.  He co-wrote “Contributo per una storia del cinema d’amatore” with Gianni de Tomasi for the magazine “Il Cineamatore”, a twenty-two-part essay retracing in great detail all events relating to the field of short films from the post-war period to the 1960s. During the 1960s he worked in the film industry and then as a director for RAI, shooting reports for several information, economy, news and lifestyle programmes until the 1970s. In the following years he returned to writing. 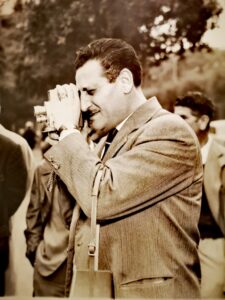 This small corpus – donated to the Centro Sperimentale di Cinematrografia by Alberto Sciarretta’s children in 2017 – includes documents which he gathered over the course of his career.  The most notable pieces of the collection are two files of press reviews, a briefcase filled with photographs of film celebrities, personal documents and bound volumes of six years’ worth of issues of the monthly film, photography and figurative arts magazine «Ferrania:  rivista mensile di fotografia, cinematografia e arti figurative » , published between 1947 and 1967 by the photographic film manufacturing company of the same name.

Alberto Sciarretta (1921-2012) – Born in Pescara on 11th June 1921, he started off as a switchboard operator for Ferrania in 1936.  After the war and completing his education, he resumed his career at Ferrania, where he ultimately held the position of Director of the Rome branch; later he was Director of the film and television division of 3M (Minnesota Mining and Manufacturing) Italy. In 1976 he became Cinecittà’s Marketing Director and in 1978 European Coordinator and Italian Marketing Manager for Technicolor. After his retirement he performed consultation services for Italian and international film companies. He was President of UNIATEC and First Secretary of ATIC. He was awarded the honour of Commendatore della Repubblica for “his dedication and passion towards the art of cinema”.